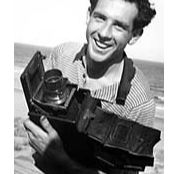 This page uses Google Maps. The map will be loaded from Google-Server and some of your data may be used by Google. In order to see the maps, please click accept. You can also click here to see further information related to this.

By World War II, Parer was experienced at photography and motion pictures, and was appointed as official movie photographer to the Australian Imperial Force (AIF)

Still frame from The Bismark Convoy Smashed (1943). Flight Lieutenant Ron "Torchy" Uren of No. 30 Squadron RAAF takes a drink from his water canteen while in the cockpit of his Bristol Beaufighter during the Battle of the Bismarck Sea. Parer flew with him to record attacks against Japanese ships

His first war footage was taken on HMAS Sydney after it had sunk the Italian cruiser Bartolomeo Colleoni. Soon after, he was aboard HMS Ladybird while it was bombarding the sea port of Bardia in Libya. His first experience at close quarters was during a troop advance at Derna.

Parer filmed in Greece and in Syria, covering the action from aircraft, the deck of a ship and on the ground with the infantry. After Syria he travelled to Tobruk once again on the Ladybird in August 1941 before covering the fighting in the Western Desert. By mid-1942 Parer was in New Guinea ready to cover the fighting against the Japanese. Together with war correspondent Osmar White, he undertook an arduous journey by schooner, launch and on foot from Port Moresby to Wau via Yule Island, Terapo and Kudjiru, in order to document the efforts of the meagre forces then fighting on the northern coast of Papua New Guinea.[3]

During this phase of the war, he filmed some of his most famous sequences, some at Salamaua and, most notably, those used in Kokoda Front Line!. This documentary won its producer, Ken G. Hall, an Academy Award for documentary film-making.

Damien Parer shot footage during the Battle of Guam that won him a posthumous Headliner Award from the American Journalists' Association.[4]

Parer was killed on 17 September 1944 by Japanese gunfire while filming a United States Marine advance in Palau on the island of Peleliu.[5]

Damien Parer was initially buried in a shallow grave on Peleliu but later exhumed and moved to Makassar War Cemetery, Celebes, South Sulawesi, Indonesia after the war in 1946. He was then moved to his current grave location in Ambon War Cemetery, Pandan Kasturi, Kota Ambon, Maluku, Indonesia when all the graves in Makassar were relocated there in 1961.[6]

In order to perform this action you have to login

Some of the listing features are available only for registered users.

In order to perform this action you have to login